When it’s meal time for our canine friends, there’s been recent debate over the best dietary choices. Some claim that dogs are omnivores and we should be limiting their protein intake by focusing more on a balanced diet. Others believe dogs can and should go completely meat free – believing vegetarianism is the best choice.

But a meat first diet has been the traditional choice for dogs for centuries and is perhaps the most important part of their daily diet. As unpleasant as it may sound, dogs are fundamentally designed to eat animal flesh. It’s what their ancestors ate, it’s what they would eat in the wild, and it’s how they get the nutrients they need to thrive.

Below we discuss the top three reasons you should continue feeding your pup a meat first diet:

Dogs are considered omnivores because their system can support a variety of foods, but not all omnivores are one in the same. Most omnivores actually started expanding their diet out of sheer survival instincts. After all, food is scarce in the wild, and if you can supplement your diet with other types of food, you have a better chance of maintaining your strength. However, each species has their own preference to what they eat, and when it comes to dogs, their preference is meat.

Their physiology is evidence of this. Their teeth aren’t designed to grind plant material, they’re designed to tear through flesh. They don’t produce enough of the enzymes to break down large amounts of plants and starches. And furthermore, a dog’s digestive tract is optimized to digest meat because they have shorter intestines, larger stomachs, and stronger stomach acids. 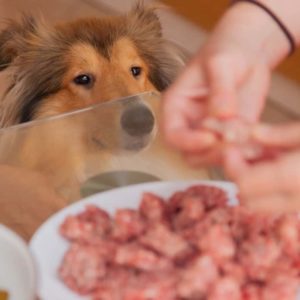 Another thing to consider is that dogs, alongside their wolf cousins, are hunters. They are not gatherers and they are not farmers. You can see this in everyday life. For instance, when you take your dog for a walk and they see a squirrel or a rabbit, they immediately go into hunt mode. Most dogs have a strong prey drive, which is a trait inherited from their carnivorous ancestors.

In the wild, these animals also scavenge. If the opportunity presents itself, dogs will eat the remains of a dead carcass. While it may not be their preferred food choice (similar to how plants, fruits, and starches aren’t their first choice), they will eat it as a source of protein regardless of whether it’s dead or alive.

So why is it that dogs can still eat foods other than meat? Doesn’t that mean they can live off of a non-meat diet? It’s possible, of course. Canids adapted to a more omnivorous way of eating as a biological means of self-preservation. Look at it this way: you can run your diesel truck off of jet fuel, but is it optimal? No, but it’s possible in a crunch. The same is true with diets.

Dogs are luckier than cats in that they can sustain themselves with a wider variety of food. Cats must have meat or they face serious health risks, while dogs can survive longer with non-meat sources of food. That doesn’t mean that dogs prefer a non-meat diet or that it’s the healthiest option. As an illustration, just take a look at any list of foods that dogs can and cannot eat. Dogs can eat blueberries, for example, but not avocados. They can eat pineapples but not lemons. They can eat peas and corn, but not onions and garlic. They can eat peanuts but not Macadamia nuts. However, these weird exceptions do not exist with animal-based foods (with the exception of artificially processed meats, like hotdogs and cured sausages for example). This evidence suggests that dogs’ primary nutrient source is meat, and that other foods are supplementary.

In the end, what an animal is intended to eat is dictated by their instincts. Dogs don’t reason the way we do. They don’t look at a piece of steak but choose to eat a salad in order to reduce their carbon footprint. Rather, instincts tell animals what they should be eating. Their instincts tell them what to eat in order to survive. Eating meat is part of who they are, and it isn’t something we should deny our canine companions.

Latasha Ball is the Marketing Coordinator for Pets Global, the founders of pet food brands Zignature and Fussie Cat. She has more than 10 years of experience in marketing and public relations in which she enjoys being able to combine her professional background with her passion for animals.