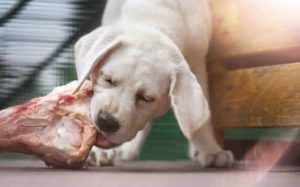 When it’s meal time for our canine friends, meat should be a prominent part of the menu. There’s a lot of talk that dogs are omnivores and that maybe they shouldn’t eat so much meat. Some even claim that dogs can and should be vegetarian. However, meat for canines isn’t a luxury, rather it’s perhaps the most important part of their daily diet. Dogs are designed to eat animal flesh. It may not sound so pleasant when put that way, but there’s no denying that it’s the truth. Dogs should eat meat. It’s what their ancestors ate, it’s what they would eat in the wild, it’s how they get the nutrients they need to thrive.

Dogs are considered omnivores because they can eat a variety of foods that isn’t meat, but not all omnivores are the same. Most omnivores adapted into that way out of necessity. After all, food is scarce in the wild, and if you can supplement your diet with other types of food, the better you might survive. However, each species has their own preference to what they eat. When it comes to dogs, their preference is meat. Their physiology is evidence of this. Their teeth aren’t designed to grind plant material, they’re designed to tear through flesh. They don’t produce enough of the enzymes to break down large amounts of plants and starches. Furthermore, the dog’s digestive tract is optimized to digest meat (i.e. shorter intestines, larger stomachs, and stronger stomach acids). 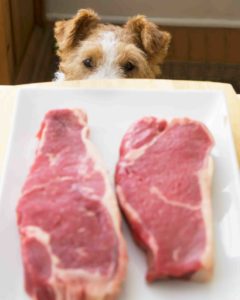 Another thing to consider is that dogs, alongside their wolf cousins, are hunters. They are not gatherers, they are not farmers, but rather they are hunters. You can see this in everyday life. When you take your dog for a walk and they see a squirrel or a rabbit, they immediately go into hunt mode. Most dogs have a strong prey drive, and this is a trait inherited from their carnivorous ancestors. In the wild, these animals also scavenge. If the opportunity presents itself, dogs (and wolves) will eat the remains of a dead carcass. It may not their preferred food choice, just like how plants, fruits, and starches aren’t their first choices either. However, because they eat meat, if they come across a meat source alive or dead, they will take it. So, far from showing that dogs are not hunters, this confirms it even more.

Yes, but why is it that dogs can still eat foods other than meat? Doesn’t that mean they can live off of a non-meat diet? It’s possible, of course. Canids adapted to a more omnivorous way of eating as a biological means of self-preservation. You can, however, also run your diesel truck off of jet fuel. Is it optimal? No, but it’s possible in a crunch. The same is true with diets. Dogs are luckier than cats in that they can sustain themselves with a more variety of food. Cats have to have meat or they will face health risks, while dogs can survive longer with non-meat sources of food. That doesn’t mean that dogs prefer a non-meat diet or that it’s the healthiest option. As an illustration, just take a look at any list of foods that dogs can and cannot eat. Dogs can eat blueberries, for example, but not avocados. They can eat pineapples but not lemons. They can eat peas and corn, but not onions and garlic. They can eat peanuts but not Macadamia nuts. And the list goes on. These are similarly grouped foods, but dogs can randomly eat some but not others. However, these weird exceptions do not exist with animal-based foods (with the exception of artificially processed meats, such as hot dogs and cured sausages, and the like). This evidence suggests that dogs’ primary nutrient source is meat, and that other foods are supplementary. 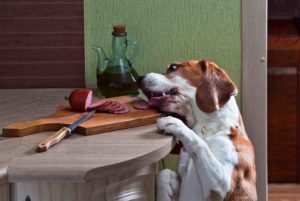 In the end, what an animal is intended to eat is dictated by their instincts. Dogs don’t reason the way we do. They don’t look at a piece of steak but choose to eat a salad in order to reduce their carbon footprint. Rather, instincts tell animals what they should be eating. A rabbit will not abandon a bowl of carrots and lettuce because there’s a pork chop offered to them. That’s because pork chops aren’t what they eat. We can apply the same logic to dogs. When presented with a plate of vegetables and a plate of meat, dogs will go for the meat every time. This isn’t because they’ve become spoiled or have developed a more opulent lifestyle. It’s because that’s what their instincts tell them to eat in order to be healthy and survive. Eating meat is part of who they are, and it’s something we should not deny to our canine companions.